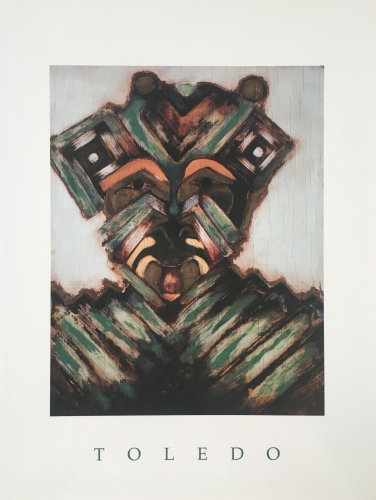 Things were stirring in the art world when Toledo began his studies at the Taller Libre de Grabado in 1957, at the age of seventeen. Although tourists still came to Mexico City to see the spectacular murals of the Big Three, and although Siqueiros was still around, lustily inciting controversies, many younger artists had turned away from the revolutionary past. They were more attuned to the one artist of the older generation who had long before abandoned social and political programs in his art: Rufino Tamayo. He had spent many years in the United States and had returned to Mexico in 1950 determined to assert his hard-won cosmopolitan views. He never tired of reminding the new generation that "painting is a world of plastic relations - all the rest is photography, journalism, literature or something else, for example, demagogy." A Zapotec in origin whose tenacious roots were never obscured by his "world of plastic relations", Tamayo was quick to see the extraordinary character of the young Toledo who, like him, had issued into the great world from small Zapotec villages. The two Zapotecs understood each other...

with text by Dore Ashton